I have been waiting for Galen and Legion's story for what seems like forever now and Gena Showalter did not disappoint!! To Galen Legion is the one who got away and he is determined to have her again. And while she is very much attracted to him, she has become a shell of herself due to horrors in her recent past.

However, Galen is determined to help her overcome her fears and try to recover the person she once was.

This story has action, passion, and plenty of heat to go around. I highly recommend this book even if you haven't read the previous Lords of the Underworld books. There has been much build up to this story, and while Showalter does not disappoint, she could have easily made this into a full length novel.

Many readers and long time fans may be disappointed that such dynamic characters had their story cut short to a novella. Both leads have complex personalities and complicated fleshed out stories that span across the series. Watching their story unfold was both a delight and a sorrow. While I loved certain aspects of the story, I was expecting more from the love story of Galen and Legion Leila, Honey.

Yes, there was romance, comedy, surprising developments, but many times I felt as if the story was just thrown together to get their coupling done and over with. While I loved seeing familiar faces Sabin, Gwen, Olivia, Aeron, William and so on , the fight scenes were cut too short. Gena is known for epic fight scenes but this time around I found them lacking. Would I recommend this novella to others? Sure, any fan of the LOTU should read this.

We all need our LOTU fix. With that said, she did set us up for a showdown between Fox and the Elite Angels. That storyline peaks my interest…. I was waiting for this book since I've read Aeron's and Olivia's which is my favorite of the series and what a let down this was. I'm a voracious reader. Olivia eventually falls in love with her teacher Mademoiselle Julie T, who in turn, and without reciprocating that love out loud, is equally in love with Olivia.

Julie never takes a wrong step, but there are signs for those who know how to read them.

I read Olivia many, many times, bought it for many of my friends, and consider it the inspiration for Call Me by Your Name. Goodbye to All That, the autobiographical account of Graves's time in the trenches during World War I, is entertaining and enlightening. It's also incredibly racist. The joke is twofold—all these silly natives have similar-sounding names, and they lack the basic intellectual capacity to grapple with the literature. A better option is Dispatches by Michael Herr. It concerns a different time, country, and war, but this is still, in my mind, the most indispensable personal account of the cruelty and violence of modern warfare.

It left me unmoved. Mostly, I kept hoping the fish would get away without too much damage. When my grandpa pushed me to catch a trout at a fish farm, I threw the rod into the pond. This series of vignettes about a grandmother and granddaughter living on a remote Finnish island is not just heartwarming: In its views of both Nature and human nature, it teaches us what it is to be in sync with the world. All of Jansson's adult fiction is deeply humane and beautiful.

Somehow, even at pages, The Alchemist is pages too long. Unlike the entitled desert wandering of The Alchemist , Wild Heart 's contemplations are inward and complex. For Lispector, there aren't easy answers—and her universe sure as hell is not interested in your hopes and dreams. Hemingway's novels—with their masculine bluster and clipped sentences—sometimes feel almost parodic to me.

Though it was published in , the book feels both contemporaneous with that period and wholly contemporary. Hazzard just writes so damn well, every sentence a gem. I'm a great admirer of Cormac McCarthy's sparer masterpieces, but I'm ambivalent about Blood Meridian, the historical epic often cited as his greatest work.

Set in the Old West and written in an impenetrable style that combines Faulkner and the King James Bible, Blood Meridian is a big, forbidding book that earns the reader bragging rights but provides scant pleasure. If you're looking for a more human-scaled, emotionally engaging novel set in the same time period, I'd recommend The Sisters Brothers by Patrick deWitt. It's a dark, funny, brutal Western about a pair of hired killers, at least one of whom has a conscience.

It covers some of the same ground as Blood Meridian and has a lot more fun along the way. David McCullough is one of our foremost historians, and his books are written with great care and impressive attention to detail. They also happen to be the driest, boringest tomes you'll ever sludge through.

One time I read his book about the history of the Panama Canal, and it required about as much sweat and labor as it took to build the actual canal. For some kick-ass history, read Destiny of the Republic, about the assassination of President Garfield, the doctors who tried to save him but actually ended up killing him, and the frantic attempt by a deranged Alexander Graham Bell to invent a machine to find the bullet located in the president's body.

Alternatively, read Frederick Douglass's firsthand account of slavery, which is equal parts shocking and heartbreaking. It's also an invigorating revenge story: Douglass identifies slave owners by name and hometown, detailing their crimes with such specificity that their descendants will be embarrassed forever.

Mark Twain was a racist. Just read Adventures of Huckleberry Finn. He was a man of his time, so let's leave him there. It's a practice that I use in order to help keep myself focused and drag the best work I can out of myself every time I sit down to write. Is this really the first post of ?

I suppose it is. Nearly half the year gone, and over 6 months since my last post. I've been doing some major restructures within the book, shifting sections and massive rewrites to the parts that have already been done. I'd probably estimate I'm nearly through the thickest part of the briar patch, and I hope to once again see the light within the next few months. I've been working steadily, both writing and abandoning sequences.

The Long Silence. Nearly 6 months without a post is a nearly incomprehensible crime in the annals of social media, but that's what has happened here. I've had a lot happening, including work on the prequel books, but I haven't felt compelled to share what's been going on behind the scenes.

I'm doing so now moreso out of guilt than out of any belief that I'm actively excited to share. I have started large restructure of the book on which I'm currently working. I tend to review the work cons.


A Child's Rhyme. In the course of writing I find one thing I keep coming back to is the idea of western culture using children's rhyme's as a way to teach or mock the world around us. The concept of ancient rhymes that may no longer be meaningful to the people singing or the audience is fascinating to me. I've also noticed how creepy they are when either Children are not the ones singing or when they are in a co. 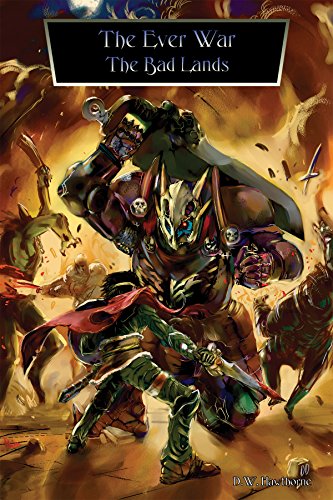 I tend to work on my books out of sequence, dealing with whatever section of the book on which I'm inspired to work. Lately I've been focusing on a late sequence. I mostly know how I get there, but when you hear the voices it's important to know that's when you have to take the dictation.

the bad lands the ever war weapon mythos book 1 Manual

I can smell the stale and slightly musty scent of damp and mildew that overwhelms the scene. I can hear the beating of a heart against the silence. Go to where the spark is to find the l. It may seem odd, but I've been working on one small clip of wording for about a month. It took a long time before I actually got it to a point that I decided I actually liked it. Like so many other writers I enjoy building in pop culture references, so a bonus internet cookie to those people that can place the song I've referenced.

I am the reaper of men SightTwice as clear as reasonBladeTwice as sharp as treasonCalmDeep and rich like silt on a river bedand just as never. Another Announcement. It's been a while since I've posted, but I haven't been idle. I'm happy to announce the arrival of The Ever Store on Cafepress. There are a number of items available including shirts, posters and iPhone cases. I've also updated the iTunes bookstore link so people can jump there from the main site again. More designs will be released in the future. Come by and visit! Destroyer's Face.

One thing I can say about a number of small projects I've been doing is that they've been slowly improving my skills with Photoshop. Case-in-point, I wasn't happy with how I had initially designed Destroyer's face, and considering he's the Title Character I wanted to revisit the image and make it something I felt more comfortable with. After a bit of re-working I finally felt pretty pleased with how he looks.

It's a reminder of how little details can make or break a project. Destroyer's Tale is Progressing. I've been working on getting major game progression points down, but with the combat substantially smoother I'm able to put more time into other detail elements. For instance, map shifts are something I'm slowly learning, but will eventually make for a far better game.

I'm including a side quest for people that are inclined to try it, and that way I can involve parts of the world that aren't necessary to the plot, but in a way that has been inspired by FFVII in that these bosses are. Working Without an Outline. I've heard many writers speak about their process for building a novel.

Some lay out post-it-notes along a wall covering the character and chapter progression, expecting that will prevent them from missing details. Others operate with less structure, for instance Stephen King has said for the Dark Tower series he didn't maintain even a notebook, instead believing that the really good ideas stay in his head.

I suppose I'm a middle ground between the two, in that I don't actively. While I don't always like to share the numerous things I have on the back burner at any given moment, because I don't know which of them might not make it to fruition, so far I've been having good success with this particular project and I'm hoping it will eventually see completion and release. Yes, you read that correctly. It says "New Game. Now Listed on Goodreads.